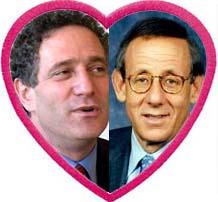 In today's NY Times Charles Bagli and Robin Shulman provide their readers with an exhaustive evaluation of the development deal that brought the Related Companies into the Bronx Terminal Market. The long and thoroughly researched piece lays bare the role played by Deputy Mayor Dan Doctoroff in paving the way for his friend Steve Ross to not only get hold of the site without the benefit of an open competitive bid but to also avail his company of public benefits that the Times reports as unprecedented in the city's history:

The city often provides developers in struggling neighborhoods with incentives, including low-interest loans, tax-free bonds and tax breaks. In addition to tax breaks, Related is getting more than $14 million in cash grants that a similar project in Harlem did not get, as well as the equivalent of a money-back guarantee if the developer fails to get the zoning he says he needs. That benefit, Andrew Alper, president of the city's Economic Development Corporation, acknowledged was unusual and possibly unprecedented.

Our comments here will be followed with a more in-depth evaluation of the story and the status of the BTM at the present time. Suffice it to say, however, that the Times piece lays bare the utter mendaciousness of the Deputy Mayor who had supposedly voluntarily recused himself from any dealings with his old buddy Ross. With an appropriate acknowledgement of Tom Robbins's original Village Voice story the Times depicts how Doctoroff spent hours discussing the BTM deal with the appointed mediator as well as his buddy Steve (along with lengthy e-mails back and forth):

Still, as The Village Voice first reported, Mr. Doctoroff's meeting and telephone logs show he closely followed the Terminal Market talks, meeting at least eight times with the mediator, Richard Ravitch, or members of his staff working on the deal. He also met frequently with Mr. Ross and talked to him by telephone, although the logs do not indicate the subject of their discussions.

City officials working under Mr. Doctoroff were not passive spectators to the deal; they had to approve the transfer of the lease from Mr. Buntzman to Related and the benefit package for the developer.

"It had to be a three-party deal," said Jeffrey Blau, a top executive at Related. "The city had the right to approve any transfers of the lease."

What the story reveals is that when it comes to economic development the claims of Mike Bloomberg that he is above special interests turns out to be blatantly false (unless Doctoroff is to be considered a free agent). The collusion between the two old friends, a collusion that began with Deputy Dan's intervention on behalf of Related in 2002 on the Bradhurst project in Harlem, is an ongoing one and can be seen in a number of other projects all over the city. It is just the kind of special interest favoritism that cries out for an independent investigation.

One of the missing pieces in the Times story (can we get a sequel?) is an examination of the legality of the evictions of the merchants. It is our contention that the evictions are patently illegal and, hopefully, that is just what Judge Cahn will decide in the court case.

We would be utterly remiss if we failed to give ultimate props to Councilmember Foster who righteously stood up for justice and defended the market merchants:

Helen Diane Foster, a City Council member from the Bronx, has criticized the city's effort to evict the market's two dozen Caribbean, African and Central American wholesale produce merchants. Ms. Foster, whose family used to buy its Christmas tree there and whose father bought produce and provisions for his restaurant at the market, said, "While we need economic development, I don't know that we need it at the expense of the merchants."

"An even larger issue is how the deal was cut," she said.

Our praise for Helen in no way diminishes our sincere gratitude to the pioneering role of Councilmember Monseratte in the BTM case (Hiram is so active and generally fearless that we often do take him for granted. His willingness to take a stand is absolutely vital to the small businesses that he so often champions). It goes without saying, however, that Foster's stand as a Bronx official is a profile in courage.
Posted by Neighborhood Retail Alliance at 9:03 AM