The NY Post reported yesterday that there is an effort afoot at the city council to give scofflaw peddlers a break: "These guys know how to drive a bargain. The City Council is in talks with the savviest hagglers in town -- street peddlers -- in an effort to get them to pay their fines, The Post has learned. Legislation quietly introduced this month by Councilman Stephen Levin (D-Brooklyn) would lower the maximum penalties for non-health-related summonses to $250 to encourage the sidewalk food and merchandise vendors to pay up."

So, let's get this straight. The council would be rewarding vendors for snubbing their noses at the law? "As it is now, if you are getting multiple fines of $1,000, it's particularly onerous and very difficult to get out from underneath this debt," Levin said. "We want to have vendors licensed and know who they are and what they are up to."

But those two paired sentences above don't make much sense together-and we know what they are up to: not paying their fines. As far as onerous is concerned, what about the tax paying stores that these vendors set up shop right in front of? Talk about onerous! How's trying to compete against a vendor selling the same goods right in front of your store-but doing so absent all of the store's hefty overhead. 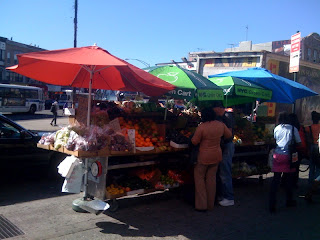 That's what is happening all over the city-as the picture above dramatically makes clear. What you see there is one of the city's vaunted "Green Cart," carts that have been licensed as an antidote to the lack of fresh produce in so-called underserved areas. The one in the picture-operating daily from 9 AM to 8 Pm between East 16th Street and Foster Avenue is less than one block away from a green grocer at 1521ewkirk Avenue. In similar fashion, two other carts merging into one giant one between Flatbush and Nostrand Aves, operates 20 hours a day just across the sidewalk in the same block.

And the city council wants to bail out the lawbreakers? Give us a break! And if you look carefully at the pictures, you'll see multiple violations in these over sized cannibals. But you will also notice the official, "Green Cart," umbrella. In this 70th precinct that was designated as an undeserved area, we are seeing green carts placed right in front of existing produce stores-as we predicted when the law was passed.

And when it was passed, we were told that there would be a review of the law's effectiveness-something that is now long past its sell by date. In spite of the hardships being experienced by food retailers, the city council is spending its precious political capital on making the plight of the  nose thumbing vendors less onerous: "As The Post reported last month, many vendors say they have no intention of ever paying. Often, they let their licenses expire because of the debt and continue to operate using licenses of others. A related bill introduced by Levin will prevent compounding of unpaid fines that raises the cost of penalties the longer they go unpaid and can quickly leave a vendor deep in debt. Keeping fines from rising would hopefully get more vendors to pay up, he said. The bills, which are supported by the Urban Justice Center's Street Vendor Project, already have 15 co-sponsors and will be discussed in hearings next year, Levin said."

The vendor laws are, as we have said, in a state of chaos-and enforcement has become a joke. On the other hand, as the WSJ is reporting, the city is in the midst of a blitzkrieg against New York's restaurants-with no council member stepping up to talk about how onerous that enforcement jihad is for those beleaguered, tax paying, eateries.
But pity the poor vendor-while the legitimate food outlets are battered by an army of inspectors: "It can't come too soon for hot-dog vendor Taimur Rahman, 39, who usually sells his snacks at the corner of East 30th Street and Fifth Avenue. Two weeks ago, he got two $500 tickets for allegedly operating too far from the curb. "This is a hard job," he said. "I'm here outside in the cold and in the rain, and now tickets, too. Fifty dollars or $100 is one thing, but $1,000 is a lot of money for me."
Levin, for his part, promises action against scofflaws-after cutting the vendors a big break: "Levin said the next step to reforming the complex vendor rules is dealing with the scofflaws who are giving their law-abiding rivals a bad name." This is what is known as putting the food cart before the horse.
The city's vending situation is simply in total disarray-with peddlers putting existing stores at risk while city inspectors look to put the final nail in their coffins. There are 1200 green grocers that have pioneered bringing fresh produce to some of the very same neighborhoods that the city has designated as lacking access. If real reform doesn't come soon, these pioneers will be relegated to the garbage dump-while city sidewalks become cluttered with tax and fine avoiding peddlers who make the passage along city blocks an unhealthy, and unsafe, adventure.
Posted by Neighborhood Retail Alliance at 5:08 AM