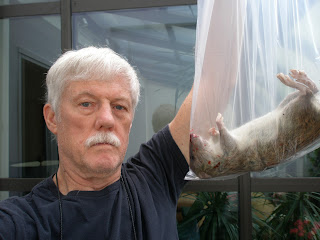 They say that a picture is worth a thousand words, and the one above speaks volumes-starring our good friend Brian Ketcham who caught the bloody creature when it was rummaging through his front yard on Pacific Street. It seems that the rats had been initially attracted by Trader Joe's, around the corner from Brian's house, when the store's garbage disposal system had broken down and waste was left on the street for pick up.

What this dramatizes for us-and we hearken back to the Errol Louis column from last July-is the public health need to find a better methodology for controlling food waste. And, as readers of this blog know well, that methodology is food waste disposers-especially for supermarkets like Trader Joe's.

As we said at the time of the Louis column on the rat epidemic in NY:

"Now Louis, is pointing all this out because he feels that the city needs to bring back its rat patrol force...We see these things a bit differently. After all, bringing in the exterminators is an after the fact kind of operation-and does nothing to root out the root causes. And what is one of those major root causes? The veritable Templeton-like smorgasbord of putrescible waste that the city hasn't found a good way to reduce and/or dispose of. As we have pointed out, the city council has launched yet another quixotic attempt to figure out ways to induce New Yorkers to compost organic waste-a silly waste of money when we have a much more effective methodology at our disposal: food waste disposers.

Food waste disposers would greatly reduce the storage of wet garbage at all of the city's restaurants, green grocers and supermarkets-and would, at the same time, reduce the operating expenses of these vital small businesses in our neighborhoods. Disposers, then, would be an excellent public health initiative that would double as an economic development effort during these tough times."

And the rats are everywhere-as this 2008 story from the Lower East Side tells us:

"I try not to come home late at night anymore,” said City Councilmember Rosie Mendez, who, along with Councilmember Alan Gerson and Community Board 3, sponsored the forum in response to community complaints. “It scares me to see these rats running around and playing by the garbage,” she said. Mendez added that the rats were “The largest growing population in the East Village. Our problem has worsened here because of all the bars and restaurants who put out all their garbage at night. We have more of these establishments then any other community.” Echoing the councilmember’s concern was Susan Stetzer, district manager of Community Board 3. “This problem really is a crisis,” she said. “There are areas where people can’t even cross the street at night because of the rats. This year we didn’t even have the little Halloween parade in Tompkins Square Park for the kids because of all the rats.”

Now the fact that it is Ketcham left holding the rat in our posted picture is quite fortuitous-since it was his wife and partner Carolyn Konheim who conducted the original food waste disposer pilot program in the mid 1990s. The study's conclusions can still be found on the DEP's website, and the results clearly demonstrated that disposers posed no threat to the city's waste water treatment system-despite the bleatings of current DEP bureaucrats. In fact, if we compare Konheim's original work to the self serving drivel in the DEP sponsored disposer study of last year, we can readily see through the fallaciousness of the agency's opposition.

The disposer issue is timely for any number of reasons. In the first place, the city is still looking to spend hundreds of millions of dollars to build a transfer station on 91st Street. If we can dramatically reduce food waste-in both the private as well as the public sector-will will see a concomitant reduction in the need for the current number of waste transfer stations. As a result, neighborhood truck traffic, as well as garbage truck export traffic, will be reduced-not to mention the amount of stored food waste that attracts the kinds of predatory rats that Ketcham caught. In addition, the commercial transfer stations in many of the city's low income areas will become anachronisms with the elimination of putrescible waste to dispose of.

Which gets us to recycling-and the city's anemic effort since the SWMP was passed five years ago. As everyone in the know, knows, organic waste is the biggest impediment to really raising the recycling rates-as we pointed out five years ago. But instead of adopting a proven food waste disposer methodology, the city council is tying itself into composting knots that will never practically address the food waste issue.

It is time for the city to admit its mistakes on the issue of commercial food waste disposers. The current rat and bed bug epidemic underscores just how imperative it is for NYC to become more innovative and less hidebound in this crucial area of organic garbage. If it does, we will see a dramatic improvement of city recycling and neighborhood public health-and an equally dramatic reduction of garbage exporting. It's past time for the city to start thinking outside of the garbage can.
Posted by Neighborhood Retail Alliance at 12:31 PM