The oversight of the proposal to build two ramps off of the Van Wyck Expressway-in order to accommodate the massive Willets Point development-is mired in secrecy; and the question of just how honest and accurate the regulatory review will be is definitely up in the air. If nothing is done to create an independent oversight process, it is likely that Queens residents will be facing road conditions-as the picture on the left dramatizes-that will mimic those of China. Under the current methodology implemented by NYSDOT, the reliance on the flawed work and questionable ethics of the enviromental consultant AKRF, indicates to us that the process has been hot wired and the public interest jettisoned.

Let's start by examining what the NYSDOT's normal protocol is when they are confronted with an expensive and complex application that will impact the state and federal highway system. Thanks to the freedom of information data we have received we know the answer to this. The following inter-agency e-mail exchange illustrates the department's standard operating procedure:

"The only outstanding comments are from the Environmental group, Jim Lau's group has to do the review in-house since AKRF prepared the report and they are the consultant retained to assist Environmental with reviews."

Jimmy Lau (NYSDOT), 9/25/2009 at 12:48PM:
"... I read through the Willets Point Draft Access Modification Report. ... In every aspect the report is complete and well documented through my cursor [sic] review.... After this review I have no major comments that would change the relevance of this submission and that they should finalize this report and submit for final design approval."

What does this signify? In the first place, it indicates that NYSDOT has a standard procedure for conducting an independent review, one that utilizes a consultant and not the in-house expertise of the agency-whatever that may be. The problem in the case of the ramps, however, is that EDC's consultant, AKRF, is also-in good monopoly fashion-the agency's own independent contractor.

In a true best practices environment, then, NYSDOT would proceed to let a contract out for an independent review of AKRF's submission on behalf of EDC. It did no such thing-and in fact allowed AKRF's flawed work to be vetted by the in-house staff that traditionally relies on this independent contractor; one that the department-and particularly this division-undoubtedly has a close working relation with.

Unsurprisingly, the head of the Environmental Group was poised-a year ago-to green light the AKRF work that was later found to be flawed; a consequence in large part of the intervention of WPU's Brian Ketcham who demonstrated just how defective AKRF's submission was. In the best of all possible worlds, NYSDOT would have reacted to these events with extreme caution-and would have, as a result, looked to get an unbiased traffic consultant in to review Ketcham's and AKRF's conflicting reports.

However, it did no such thing. It maintained an exclusive and secretive relationship with the EDC consultant in its review; in spite of the claims expressed in a meeting in February that there would be an open line of communication with the whistle blower Ketcham-whose superior work product had forced EDC to revise its defective ramp report.

But it gets worse. Seeing just how egregious the defective AKRF report was-and the way in which NYSDOT was continuing to rely on a consultant that had submitted shoddy and deceptive work-WPU approached the Natural Resources Defense Council-arguably the state's leading environmental group. When NRDC reviewed the Ketcham critique of AKRF's work, it fired off a letter to both NYSDOT and the Federal Highway Administration calling on both agencies to initiate an independent review of the ramps.

NRDC's request was a simple one: "NRDC is not taking a position on advancing the Willets Point project or on constructing the ramps. But based on our preliminary review, we are concerned over the discrepancies in the study results, and also by the prospect that a project could impair regional mobility..:Thus consistent with our position on other large-scale regional development projects we believe that the stakes are high enough with the building of new access ramps for the Willets Point project to warrant a full environmental review under the National Environmental Policy Act (NEPA)...By undertaking such independent review, the public can be satisfies that the proposal's impacts have been adequately assessed..."

In July, however, NYSDOT informed NRDC that it didn't need to do any independent review saying, "The NEPA documents that are being developed are an Environmental Assessment and a revised Access Modification Report....We understand the request for an independent review but believe that working closely with NYCEDC, we can assure that the data will be based on sound data."

How blatant a slap in the face is this to transparency and the public interest? How can anyone trust the consultants who attempted to deceive the state agency with a fatally flawed document-one that contradicted its own earlier report submitted to the NYC Council as part of the land use review application? And what does it say about NYSDOT's integrity when the agency ignores the deceptive practices of the consultant and allows it to continue to perform as the exclusive agent for providing traffic data to determine the viability of the Van Wyck ramps?

We can see just how NYSDOT lacks trustworthiness and integrity in its apparent willingness to ignore the keen skeptical insights of Michael Bergman, its own structural engineer. Bergman told agency policy makers that the EDC report was simply junk.

"I am not satisfied with the original document or with any of the responses. The consultant apparently refuses to recognize that his entire data collection work on the VWE near (former) Shea Stadium was badly flawed, because it took place during a major construction project. I have criticized his speed analysis, and his response was that the speeds and traffic volumes are related. His statement is correct, but that means that the traffic volumes used in the report are also flawed...

In my opinion, the report we have is poorly done and is not adequate justification for changes in access to an Interstate highway."

Yet, in spite of Bergman's attempt at righteous intervention, policymaker Pete King wants to move ahead:

After several phone calls with EDC and internal discussion, we have the attached. Mike, I think you're correct in noting, earlier in the review, that the questions we raised were not being answered. Rather than tell us how they would address an in issue, they kept telling us why the issue wasn't being addressed. However, in looking at the attached, I believe that, by and large, they are making credible comments to our concerns. I know that there have been considerable discussions with EDC, URS, P/B (who did the modeling for X735.56) and regional staff. Planning is satisfied, as is Traffic/ Safety that the modeling and design speed issues have been adequately addressed."

But, of course, nothing had been adequately addressed-and the intervention by Ketcham and WPU blew a hole in this rush-to-approve effort to accept a ramp report that NYSDOT was later forced to admit was defective. Now the public is being asked to accept the agency's judgment that it can trust the defectors over at AKRF-this should be unacceptable to any Queens resident-or any local elected officials who still have their wits about them.

As Ketcham asked in an e-mail to us: "Does NYSDOT really want to trust an outfit that could not do quality control of their products and protect them from this nonsense?" And Queens gadfly Benjamin Haber, writing in the Ridgewood Ledger, agrees: "In addition to the loss of hundreds of small businesses and the jobs of thousands of employees and their dependents, the proposed Willets Point project also involves the general public, whose daily lives will be affected by the huge increase in the volume of vehicular traffic on the Grand Central Parkway and the Van Wyck Expressway. Suffice it to say, the Willets Point businesses and their employees and the general public are entitled to a full and fair discussion of the issues, something the Bloomberg administration and the city Economic Development Corp. have sought to avoid."

But if this ramp construction is allowed to go forward-rubber stamped by an agency whose internal communications indicate that it has an unhealthy slavishness towards the mayor and his minions-then it is the communities of East Elmhurst, Kew Gardens, Corona, Flushing and College Point-just to name a few-that will suffer the cosnsequences of the malfeasance of the regulators. If this happens, the China Syndrome will come to Queens. 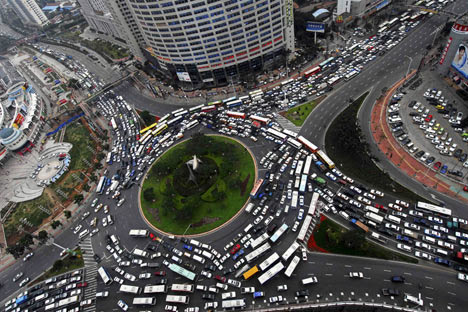 Posted by Neighborhood Retail Alliance at 4:42 AM